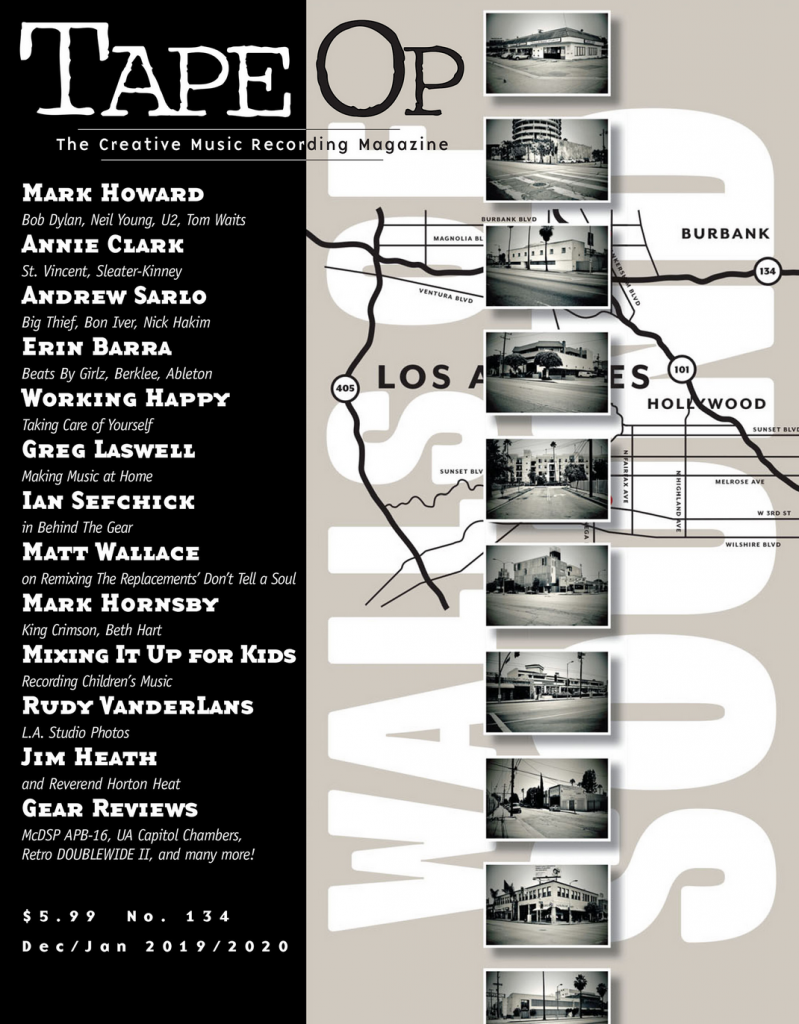 As BURL’s Mothership B80 [Tape Op #84] has gained popularity with serious recordists as a flexible system to build your own AD/DA converter interface, there’s been need for more daughter card modules in order to add flexibility. I’ve had my BURL stocked with 8-channel BAD8 and BDA8 converter cards for years, and recently fell in love with the BDA4’s [#131] transformer-balanced outputs. This new B4 card is interesting; it’s basically a four channel input, straight to digital with its own converters, that can act as a microphone preamp or a line level input. This device will make a ton of sense for the people that need it. I can see someone filling a Mothership B80 full of these B4 channels for 40 mic preamp inputs (with conversion!) for tracking live events or using as stage inputs for digital consoles. Mic preamp level is set via the nine gain increase steps on the front panel knob, which interestingly is a digital encoder, meaning that preamp levels will eventually be able to be remotely controlled – this would be handy for places where the converters are in a machine room, for placing the preamps right near a performer (imagine the tiny cable run!), or for the above live input idea. Visualize this preamp as a direct input into your computer-based platform. Think about that; no extra cables and transformers or circuitry between preamp and converter. I can even imagine setting up a Mothership B16 with a B4 for line/mic inputs and a BDA8 or BDA4 output card for a very high class mobile or home studio rig.

This unit was not really built for a full-on pro, analog-based studio like Jackpot!, where many times we follow the mic preamp choice with a compressor, equalizer, or even summing (like pesky multi-mic’d guitar amps). All the uses above are what it was designed for. But because all BURL stuff is designed properly, and I am curious, I quickly discovered what I liked about the B4 in a studio setting.

I first did some tests of the line input by mixing back into the B4 and the BAD8 from my console outputs. Line input, accessed by turning the gain knob all the way down, uses different taps on the input transformer instead of simply using gain-reducing resistors as many preamps do. I really preferred the sound of the B4 for mixing into, and I’ve been mixing back into it from our console ever since. The B4 line input captured a slightly clearer signal, better width, and definitely more detailed high frequencies (but not simply brighter). Kudos must go to the new BX6 input transformer, plus there are no capacitors or integrated circuits in the discrete, all balanced, Class A audio path. Next, I needed some makeup gain while tracking a direct guitar into a rack-mounted spring reverb. Having the extra gain right at the converter, so to speak, made the task far easier.

I began using the mic preamps on the B4 and was simply blown away. Just like the excellent BURL B1 and B1D 500 Series mic preamps [Tape Op #111], this is a top-quality mic pre for sure. Nasty percussion sources like tambourine and chimes, with high end, sharp transients, came through the recordings loud and clear without distortion or smearing. Guitar amps, backing vocals, acoustic instruments, and all sorts of other tracks were also thrown at it, as well as the outputs of many different types of mics, and the B4 easily sonically held its own against the studio’s array of outboard preamps.

I’m not sending this B4 back, as I relish having four slightly higher-fi input channels, but I want the reader to be aware of what this unit does not do. There’s no polarity flip button, but in most cases phase issues would be addressed post converter. There is no pad either, but a really loud mic output can be fed into the first position line level input setting, which I found works pretty well. There is no DI input, and I don’t know why you’d expect one. There’s 8.5 square inches of real estate on the front panel, so with four gain knobs, a phantom power button, and two LEDs (48 volt and level) something had to give; plus, in many ways the B4 is not being offered to us as a typical studio mic preamp. The B4 is here to solve other problems, okay?

Think about the price of this unit. You’ll need the B80 or B16 chassis to support this daughter card, but at $550 per channel you get a top-level mic preamp/line input and A-to-D converter. If you bought four B1 preamps and an A-to-D converter you’d spend $5000. For me, having four high quality mic preamps that can also act as two excellent-sounding stereo inputs for mixing into is totally worth it. I love the BURL Mothership system, and the B4 gives me even higher quality final results. BURL, once again, upped my game.

(As this issue was getting wrapped, BURL announced the BAD4M 4 channel analog input and the BDA4M 4 channel analog output daughter cards, with switchable transformers and stepped attenuation for mastering and mixing purposes. Look for our review soon.)